Violent Deaths and Enforced Disappearances During the Counterinsurgency in Punjab, India

(Fremont, CA, January 26, 2009) As Indians gather for Republic Day celebrations this week to mark the adoption of the Indian constitution, new analysis reveals the human cost of suspending constitutional rights in India. Ensaaf and the Benetech Human Rights Data Analysis Group (HRDAG) released a report today presenting verifiable quantitative findings on mass disappearances and extrajudicial executions in the Indian state of Punjab, contradicting the Indian government’s portrayal of the Punjab counterinsurgency as a successful and “humane” campaign.

This report uses quantitative methods to scientifically demonstrate the implausibility that these lethal human rights violations are random or minor aberrations as suggested by Indian officials.

The report by Ensaaf and HRDAG, “Violent Deaths and Enforced Disappearances During the Counterinsurgency in Punjab, India,” presents empirical findings suggesting that the intensification of counterinsurgency operations in Punjab in the early 1990s was accompanied by a shift in state violence from targeted lethal human rights violations to systematic enforced disappearances and extrajudicial executions, accompanied by mass “illegal cremations.” Indian security officials have dismissed claims of human rights violations as unavoidable “aberrations” during the counterinsurgency against alleged terrorists in Punjab from 1984 to 1995.

“This report challenges explanations by Indian security forces for enforced disappearances and extrajudicial executions using more than 20,000 records from independent sources which have been analyzed using statistical methods,” said Romesh Silva, a demographer at HRDAG and co-author of the report. “This scientific analysis reveals that answers given by the government regarding the nature and extent of these violations are implausible given the available evidence. The victims and their families have a right to the truth.” 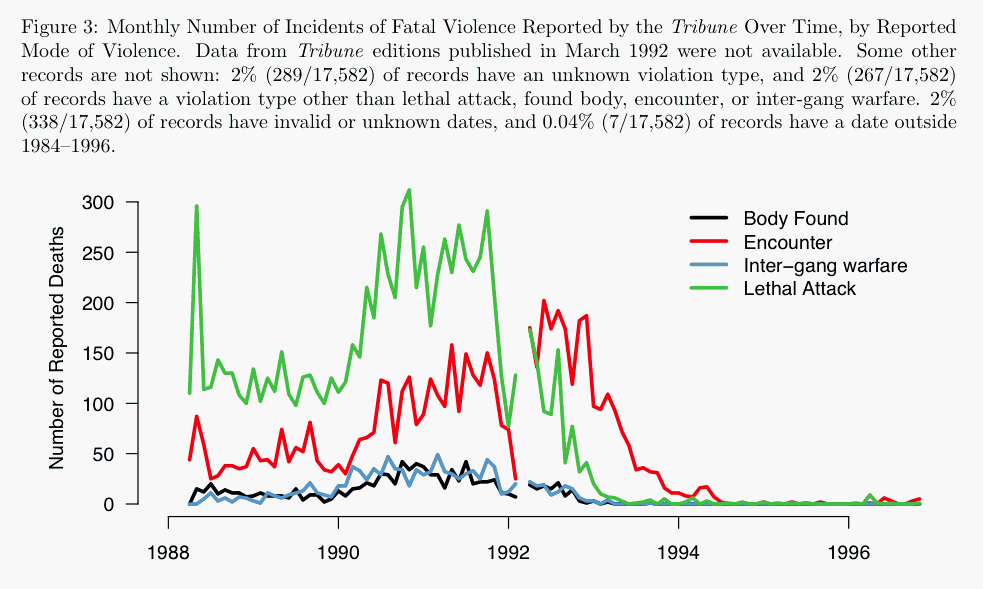 The report demonstrates that reported enforced disappearances and extrajudicial executions were most strongly correlated with reported deaths from encounters. The pattern is consistent with previous qualitative evidence that the events reported in the Tribune were staged (as “fake encounters”) to conceal the illegal nature of the violence and the security forces’ responsibility for these acts.

Human rights groups have collected extensive qualitative evidence about the types of abuses committed by Indian security forces and the impunity that persists in Punjab. Until now, human rights groups have lacked the capacity to conduct quantitative research to analyze these violations and definitively challenge explanations put forward by the Indian government.

This report uses quantitative methods to scientifically demonstrate the implausibility that these lethal human rights violations are random or minor aberrations as suggested by Indian officials. The strong correlation found between lethal human rights violations and overall lethal violence across time and space supports the conclusion that enforced disappearances and extrajudicial executions were part of a specific plan or widespread practice used by security forces during the counterinsurgency.

"This scientific analysis reveals that answers given by the government regarding the nature and extent of these violations are implausible given the available evidence," said Romesh Silva, co-author of the report.

The analysis also demonstrates that between 1988 and 1995, militant deaths reported from an “encounter” or exchange of gunfire with the security officers were strongly correlated with lethal human rights abuses reported by the victims’ families. This correlation supports assertions by human rights groups that these encounters were fabricated by security forces to conceal extrajudicial executions.

The report further demonstrates that when human rights violations increased dramatically after 1991 and fewer families were able to recover the bodies of their loved ones, “illegal cremations” acknowledged by the Indian National Human Rights Commission also increased. The strong correlation between these events suggests a shift in state violence during the height of the counterinsurgency towards large-scale enforced disappearances and extrajudicial executions, coupled with mass cremations to dispose of the bodies. 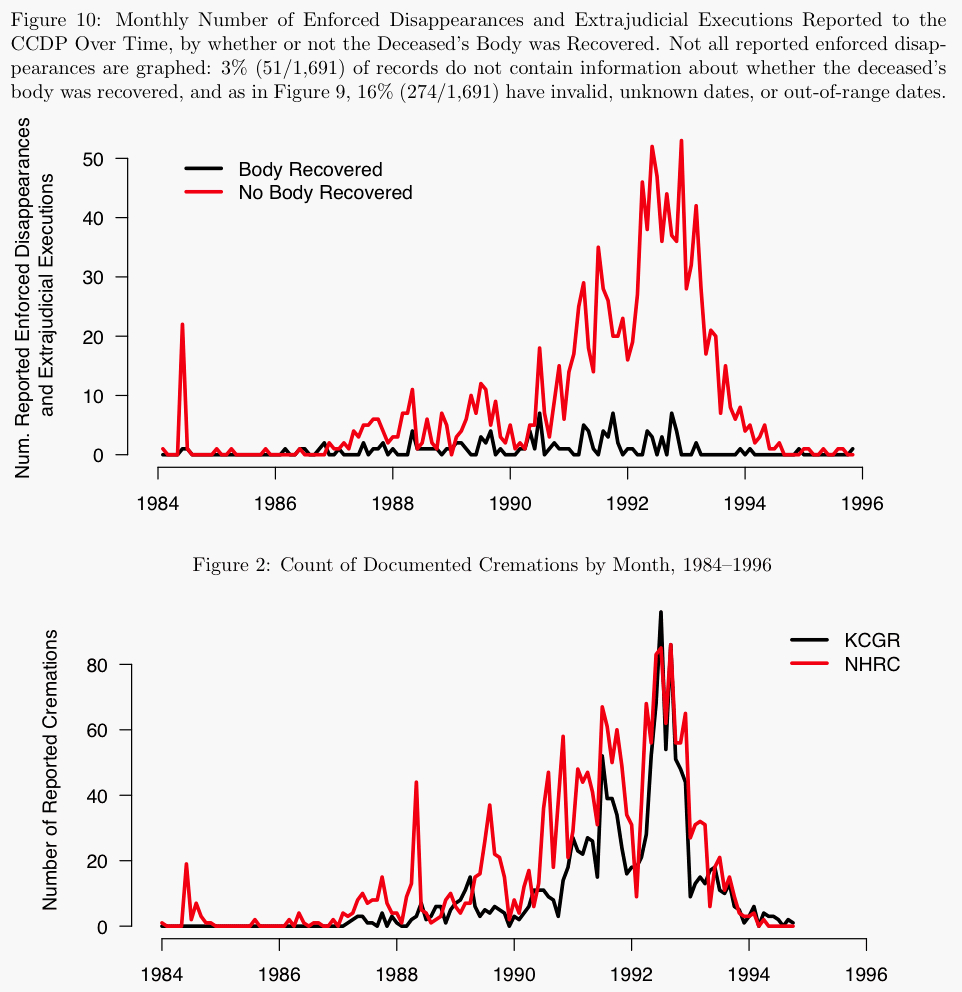 “This report should serve as a wake-up call to the Indian government that its security policies and practices violate the fundamental rights of its citizens,” said Jasmine Marwaha, co-author and Program Associate at Ensaaf. “Given the empirical findings suggesting systematic abuses in Punjab, the government can no longer deny the facts while using the rhetoric of national security. The public is now equipped to challenge the government’s false narrative, and demand the vindication of survivors’ rights to truth, justice, and reparations.”

The strong correlation found between lethal human rights violations and overall lethal violence across time and space supports the conclusion that enforced disappearances and extrajudicial executions were part of a specific plan or widespread practice used by security forces during the counterinsurgency.

The Ensaaf/HRDAG report is the most comprehensive, quantitative analysis to date of available data on human rights violations during the Punjab counterinsurgency. The analysis reviewed data from the local English-language newspaper, the Tribune, cremation ground records from the late human rights activist Jaswant Singh Khalra, acknowledged cremations by the Indian National Human Rights Commission, and reported lethal human rights violations provided by the Committee for the Coordination on Disappearances in Punjab and the People’s Commission on Human Rights Violations in Punjab. The observed correlations between reported human rights violations, reported deaths of alleged militants, and reported secret “illegal cremations” shed further doubt on the government’s official accounts of lethal violence in Punjab and its justification for such a disproportionate use of force.

Additional data and analysis will allow for clarification of the total magnitude and patterns of violence throughout Punjab, broadening the discussion about the impact of counterinsurgency strategies on human rights. Scientifically defensible analysis of political violence can help enable honest public dialogue and support an historically accurate narrative of the counterinsurgency in Punjab, and initiatives for justice. This effort is part of joint work by Ensaaf and HRDAG to introduce new evidence available to truth, justice, and accountability processes that are focused on political violence during the Punjab counterinsurgency. 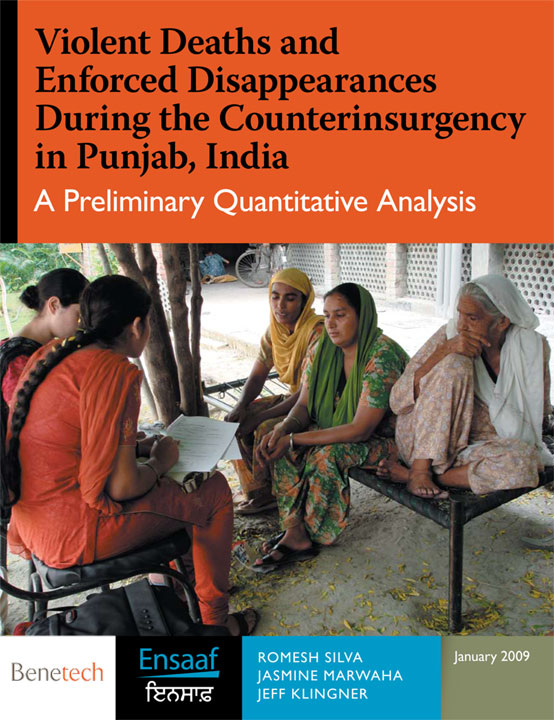 Appear for the Disappeared

Join Ensaaf for our Walkathon and Fundraiser. Take 5,269 steps (4 km) in one day in honor of each victim profiled on our Mapping Crimes Against Humanity site.

Multiply your impact.
Fight for truth and justice now, and double your donation.

Rajvinder S. Bains, a human rights attorney in the Punjab & Haryana High Court for over 20 years, discusses his experiences with the High Court in cases filed on behalf of victims of disappearances or extrajudicial executions. (Oct. 2007)

Mohinder Singh:
What justice can we get from here?

Mohinder Singh discusses the abduction and murder of his son by the Punjab police and his pursuit of numerous avenues of justice. (Oct. 2007)

Tarlochan Singh:
A Mockery of Justice

Stay up to date about Ensaaf’s work to protect human rights in Punjab and beyond.

Gurcharan Singh and his Desire for Justice

In an SBS Dateline program on Punjab, Geoff Parish discusses the Punjab governments offer of compensation to 17 families, with no investigation or admission of liability by the state, in the Punjab mass cremations case. Gurcharan Singh rejected this offer. (Apr. 2002, Uploaded with permission from SBS.)

A Witness Among the Bodies: Surviving Bluestar

On the 30th Anniversary of Operation Bluestar, Ensaaf presents an eyewitness account of the Indian Army attack on The Harmandir Sahib Complex in Amritsar, Punjab, from June 1 and June 6, 1984. This exclusive interview reveals how the Indian Army intentionally killed thousands of civilians and used excessive force during this assault.

On November 26, 2013, the Punjab & Haryana High Court allowed the appeal of the State of Punjab and reversed and nullified the decision of the Single Judge directing investigation by the CBI. Not only did it refuse to order an inquiry into Satwant Singh Manak’s allegations that he witnessed the Punjab Police torture and unlawfully kill ten people, it also fined Manak, ordering him to pay 2,000 rupees to each of the accused police officers.

A Labor Of Love: Contesting Impunity

Navkiran Kaur Khalra:
“We are proud of what our father did.”

Navkiran Kaur Khalra, daughter of murdered human rights defender Jaswant Singh Khalra, recounts her family’s struggle for justice and her father’s discovery of thousands of killings and secret cremations by the Punjab police to hide evidence of wrongdoing. (Oct. 2007)

In his last speech made to a Canadian audience, Jaswant Singh Khalra discusses his investigations into the thousands of illegal killings and secret cremations by the Punjab police and his readiness to die to expose the truth about these crimes. Jaswant Singh Khalra begins his speech with a moving fable about the struggle of truth and light against expanding darkness. He recounts how he traced the fate of many disappeared Sikhs to Amritsar’s municipal cremation grounds. Through government records obtained from these municipalities, Khalra exposed a detailed history of systematic human rights violations in which security forces abducted, murdered, and secretly cremated an estimated 6,017 Sikhs in Amritsar district alone–then one of 13 districts in Punjab–from 1984 to 1995. (Apr. 1995)

In this video, Paramjit Kaur Khalra describes the need for a truth commission to redress the thousands of disappearances and killings in Punjab, India perpetrated during the counterinsurgency of 1984 to 1995. In September and October 1995, Indian security forces illegally detained, tortured, and killed her husband, human rights activist Jaswant Singh Khalra, for his work uncovering over 2,000 cases of extrajudicial executions and secret cremations in Amritsar district alone. On November 4, 2011, India’s Supreme Court upheld life imprisonment for five officers involved in Khalra’s unlawful abduction, torture, and killing. Mrs. Khalra continues to seek justice for the all victims of illegal killings and disappearances.

On Human Rights Day, we share this documentary to show you how your support helps us document abuses on the ground. Seeking Ensaaf, filmed by Andrew Heskett, Ryan Westra, and David Thompson, recipients of the Sikh Scholarship Program at Chapman University, in August 2013, follows Ensaaf field workers as they document a case of extrajudicial killing in Punjab. Thank you for joining us on this journey to end impunity and achieve justice for the disappearances and unlawful killings of the Decade of Disappearances in Punjab.

On the 20th anniversary of the police abduction of human rights defender Jaswant Singh Khalra, Ensaaf released A Light of Justice: Commemorating Jaswant Singh Khalra. This 30-minute film contains interviews with Khalra’s family, as well as archival footage of Khalra when he was investigating secret cremations and disappearances in Punjab.

Twenty years after Khalra’s martyrdom, the architects of the widespread and systematic human rights abuses in Punjab remain free. The Indian government is no closer to bringing Gill and the other perpetrators to justice for organizing Khalra’s – and thousands of other innocent Sikhs’ – death.

Satwant Singh Manak joined the Punjab Police to provide his family with a stable income. But in the late 1980s and early 1990s, in response to an insurgency, Indian security forces committed systematic and widespread torture, disappearances, and unlawful killings in Punjab. Manak silently witnessed the torture and executions of 15 unarmed individuals at the hands of his fellow police officers. The killing of Kulwant Singh, a teenager who had passed 10th grade, deeply affected Manak. No longer able to suppress his conscience and the horror of what he witnessed, he resigned from his job and filed a case against his fellow police officers. That case covers ten of the victims.
This site uses cookies. By continuing to use this website, you agree to their use. Privacy Policy. Accept
Privacy & Cookies Policy
Necessary Always Enabled